Bake of the week: Cappuccino traybake
Movie of the week: Joy
Book of the week: A Humble Companion by Laurie Graham
This has thankfully been a less hectic week than last. Still, I managed an entire Thursday and Friday baking, what with a cake for choir (for fun), 24 cupcakes for the school bake sale (obligation) and a second birthday cake for HO (somewhere in between!). Of all of those, choir cake was definitely the most fun, being the smallest amount of work for the most reward. HO’s death by chocolate cake was quite fiddly, involving slicing cakes horizontally, which needs concentration and precision – never my strong suit – and cupcakes are just dull. So the cappuccino traybake for choir gets the honour of being my bake of the week. I constructed the cake from a mixture of a couple of recipes – one from Nigella’s Domestic Goddess, and one from my Mary Berry Bible. So it became an espresso traybake with a white chocolate and sour cream icing. The traybake is a bastardised version of the Mary Berry coffee and walnut traybake and the icing is pinched from Nigella’s cappuccino cupcakes. The icing is delightfully rich and sweet with the coffee cake just taking the edge off the sweetness and not overdoing the coffee flavour. 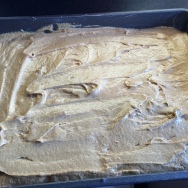 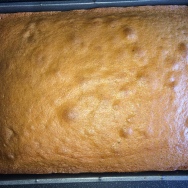 The traybake being an easy all-in-one mix, it went straight in the oven and came out smelling delightful. The icing was slightly less simple as it required using melted chocolate and cold sour cream, but since I’d forgotten to put the sour cream in the fridge when I bought it that morning, it wasn’t too problematic to get them all to a similar temperature. I was a bit skeptical about the icing as it seemed very sloppy,

but when I spread it on the cake it didn’t run as I assumed it would, but sort of sat there looking all billowy, just as if it was cappuccino milk froth! A finishing touch of cocoa powder and I had one massive cappuccino. Unfortunately we were a bit thin on the ground that night at choir, so I did have to go round at the end trying to get rid of some more, but in the end I only had to take a few pieces home with me. Which wasn’t that much of a hardship.

One of the major conveniences (pun intended) of going to Silver Screenings is that I’m considerably more spry on my feet than most of the rest of the audience and can get to the loos before a queue forms! Another being that although there are trailers, there are no annoying adverts beforehand to blight your viewing pleasure. This week I went back again.

Today I went to see Joy. From the trailer I was expecting a formulaic underdog movie about a woman trying to make ends meet in difficult circumstances, and to some extent that was what I saw, but this movie did manage to subvert some of my expectations. Joy is a young mother of two who works on an airline desk to support her rather chaotic family. Her unsuccessful club singer ex-husband lives in her basement, her mother seems to permanently reside in bed watching soap operas with a Dallas/Dynasty flavour to them and her half-sister seems to be jealous of her. One day her father is dropped off on her doorstep after splitting up with his girlfriend and Joy is pulled over at work and told that unless she is prepared to work nights then her job no longer exists. This seems to be a tipping point for Joy and she starts to remember the girl she used to be, the one who had been constantly told by her grandmother that her skill with making things from ideas in her head would rescue the family and make them rich. This leads to her having an idea for an innovative mop and her attempting to start a business career. I wasn’t quite sure what to make of this movie – it has slightly surreal tone to it that I wasn’t quite expecting, but in a way this does save it from being a rather worthy bio-pic about a woman pulling herself up by the bootstraps despite people constantly telling her how useless she is (they really go for it at one point which is very uncomfortable to watch) and provide a streak of humour. The script does sometimes slide into melodrama reminiscent of the soaps that Joy’s mother loves so much but it is quite hard to tell if this is intentional, the lines in the soap within the movie are all about women refusing to be trapped by convention or circumstances and to shoot their way out, which is an option that Joy is asked if she would consider to protect her business at one point. The performances are all excellent – Jennifer Lawrence again completely believable as the downtrodden Joy, Robert De Niro doing good dad action and Bradley Cooper for once not doing repressed anger – in fact the part of the movie where Nathan shows Joy around QVC is probably my favourite. All in all, a more unusual movie than I had expected, but a thoroughly enjoyable one.

A Humble Companion was one of those books that I picked up on a whim in the library.

I have read a Laurie Graham novel before called Angry Housewives Eating Bon-Bons that I very much enjoyed, but I didn’t know she wrote historical fiction. It turns out that this was her first historical novel and it was a seamless transition. This book follows a fictional Humble Companion to one of George III’s children – the youngest daughter Sophia, known as Sofy. It is told in retrospect by Nellie and details her life from when she first met the “Royalties” through all her dealings with them until her death as an old woman. I didn’t know very much about the Hanovers, other than the mad king and the profligate Prince Regent. They don’t seem to be a popular bunch for history lessons. I know no social history of the age really, apart from a small period in the middle in which Austen novels are set, and almost nothing about how people lived in London. From that persepctive it was quite interesting. The main character Nellie comes from a relatively well-off family, but sees that in many ways her life is less restrictive than the goldfish bowl that the Princesses are obliged to inhabit – obliged being the most appropriate term as these women have no money of their own, no means to get any and every decision in their lives is made for them by someone else. It gave a good view of the life that women led at the time and the resources they had available to deal with the situations they found themselves in. It has a healthy dose of conspiracy and deep dark royal secrets too, whcich are always fun to read. Nellie as a character is quick witted and easy to like, it was a pleasure to inhabit her life, even if it did drag on a bit at the end.