This weekend was my dad’s birthday and the Sunday before that my mum hovered in front of me just before leaving my house and mentioned how busy she was that week, and how many things she had to do. Fortunately for her, I have known her for a few years now, and immediately offered to make Dad’s birthday cake. Which was a relief as she “finds baking so stressful”. He asked for a ginger cake and I had a really good response to a Mary Berry spiced ginger traybake that I made before Christmas and thought that with a little tweaking it would make the perfect birthday cake for a ginger mad dad. I was a little concerned that the treacle would make it too heavy and dense for a layer cake, so I found some 23 cm sandwich tins to stop it from being too thick and crossed my fingers. It worked beautifully! I did have a bit of an issue turning it out as Him Outdoors was doing homework with D at the kitchen table at the time and they kept bugging me. So I blame them entirely for the fold and slight tear in one of the layers. Them, and fractions. 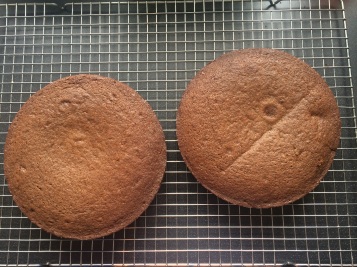 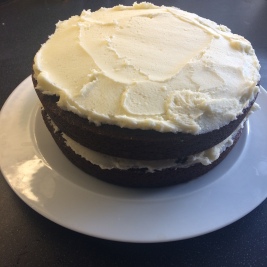 The cake smelled fab, however, and buttercream is a constant friend and ally when it comes to sticking baking mishaps back together! Speaking of buttercream, I used a standard buttercream recipe and added 4 tbsps of stem ginger syrup from the jar in place of the other liquid. Yummy sweet buttery ginger icing. Highly recommend the ginger cake – I carefully left what remained of it at my parents’ house and resisted taking any home, or I would have eaten about a quarter of a cake by now!

This week saw the most exciting thing to happen to Orpington for many years, and something I have been dreaming about for 3 years now – the new cinema opened!!! (definitely exciting enough for 3 exclamation marks) I haven’t lived within a short walk of a cinema since I lived in the centre of Liverpool behind FACT around 10 years ago. This is an Odeon, so I’m not expecting too much in the way of arthouse cinema, but at least I get to go and see a movie without having to drive for miles and park in irritating places. To celebrate, HO took the day off work and we went to see Deadpool while the kids were at school. Tickets were £2 for everything for the first 2 days, so we got posh seats and everything! The cinemas was shiny and new and lovely, even if the escalator did go unsettlingly fast, that could be taken to be throwing you into the future of cinema. Apparently they have yet another new way to watch movies, something called iSense. Silly name, but I haven’t tried it yet, so I can’t really comment.

Deadpool was hilarious. And moving in places. HO has been going on about it for months (he tells me years, I must have blocked that out) and I had seen a trailer, so I was fairly confident that it wasn’t one of those comic book movies that took itself way too seriously, like, oh, Winter Soldier for example – a movie during which I could cheerfully have nodded off, if it hadn’t been so damn loud. Deadpool is funny, and dirty, and silly and stupidly violent. If you don’t like severed heads being used as footballs, then this is not the movie for you! One of my favourite jokes involves a throwaway reference to International Women’s Day, which is Tuesday next week, 8 March, so I should go and find some suitably womensy movies to watch. Not necessarily and easy feat! I don’t think Deadpool passes the Bechdel test, I would have to watch it again to be sure, but it does have some pretty solid female characters which could easily have been male ones, so it gets credit for that. And if you want to go and stare at Ryan Reynolds, then fear not, he only wears the suit for about half the movie, so you get to do that too 😉

The book! I love to read and get through enough books that regular trips to the library are necessary to sustain literary life. Please don’t close down Orpington library evil Bromley council!

This one caught my eye because of the title – a book set around a cinema, what could be better?! It’s a whimsical story of a woman who vanishes after one perfect date. It has a light touch, drawing you in to the narrator’s world slowly but surely. The story is told in retrospect in a way reminiscent of a movie voiceover which is appealing and slightly irritating at the same time. It would probably have helped if I had ever learned more than a syllable of French as there were little smatterings here and there which I was too lazy to look up when I had the opportunity. I do quite a bit of reading in my car before school pick up and there is no internet reception on that road and, never having studied French, I obviously don’t have a French dictionary, so those remained a mystery! All in all, it was a pleasant read, but didn’t have much emotional depth – I was never very sure why the guy (I have forgotten his name already!) was searching for the woman in the red coat for so long or so intently and tended to agree with his best friend that he was possibly a little bonkers.

This week coming includes the annual test of parental creativity and patience that is World Book Day, so I will have to see if there is much opportunity for baking or reading, let alone writing about it, since O has already changed his mind about who he wants to be several times and last year did not go terribly well, so wish me luck!