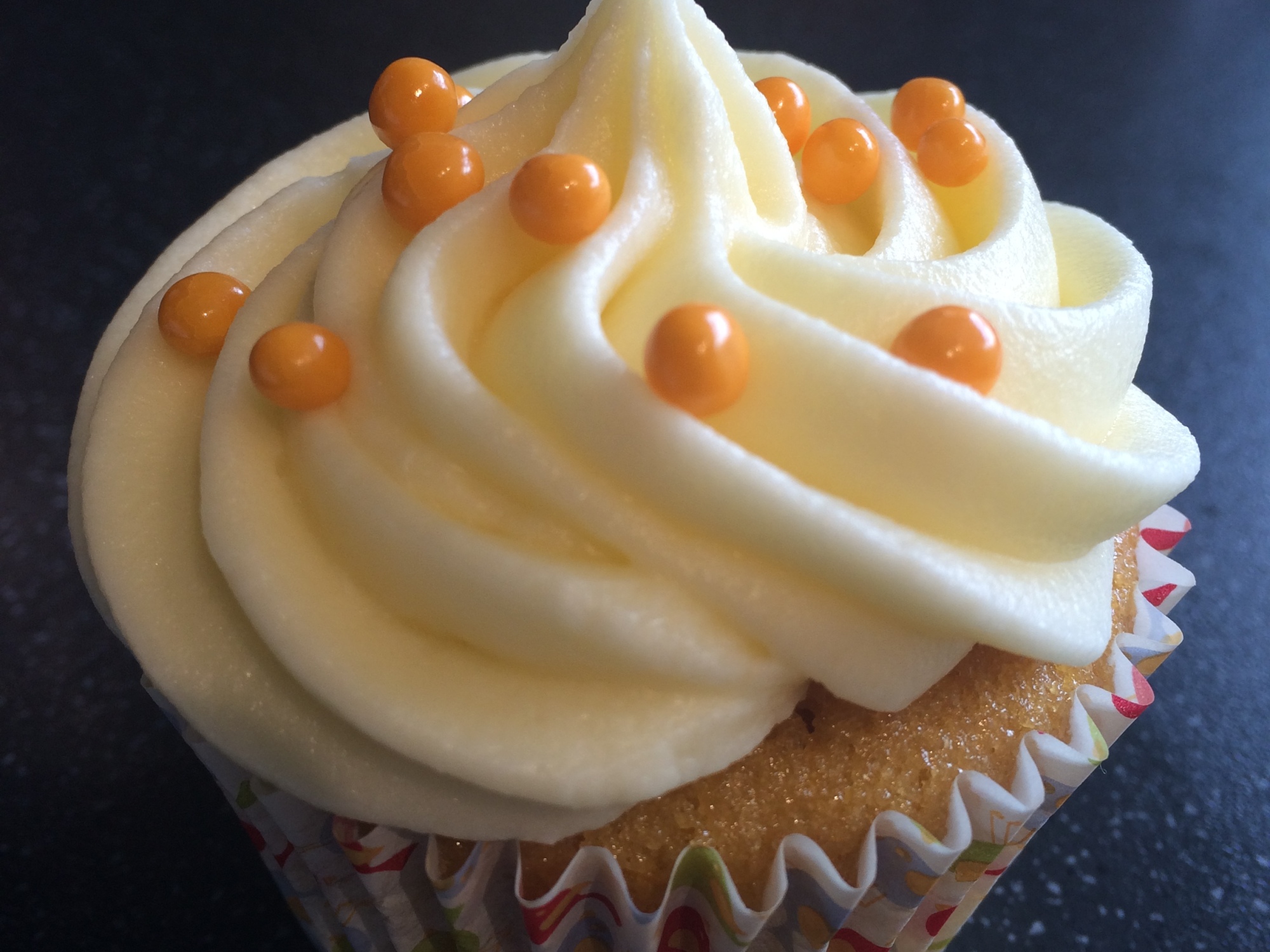 It’s nearly the end of term. I can feel the long summer holidays creeping up on me, preparing to steal all my me time and replace it with sitting in endless playgrounds and the renewed inability to use a toilet without someone somewhere shouting “muuuuuuuummmm! Where are yoooooou?”. Despite that, I am looking forward to the break. I quite like spending time with my kids (when they’re not being little shits) and, frankly, who wouldn’t look forward to 6 1/2 weeks of not having to get up at the behest of an irritating beeping alarm at 6.26 in the morning?

One thing I will definitely miss over the holidays is my choir. We don’t meet during the long break so that particular stress reliever/happy refuge/cake sampling group is unavailable. I’m not entirely sure what I’m going to be replacing it with in order to get through this trying time – possibly hefty amounts of gin! Anyway, last week I had a jar of lemon curd left over from making D’s second birthday cake and I love lemon curd, so it was imperative that I removed it from the house before I stuck a spoon in it and just kept eating. The intense boredom that was a day stuck in the audience of not one, but two school sports days, I applied my sun scorched mind to the task and came up with the solution: St. Clement’s cupcakes to take to choir – orange cakes with lemon buttercream icing and a hidden lemon curd centre. Nom nom.

The cakes are a cinch – just your basic cupcake recipe but with the finely grated rind of a large orange added. I find when making cakes with citrus zest that it tends to stick to the whizzy bits at the end of the beater arms rather than go into the mixture. I don’t know whether this is a universal thing or something to do with the odd profile of my cheapo mixer, but I prefer to stir in the rind at the end. 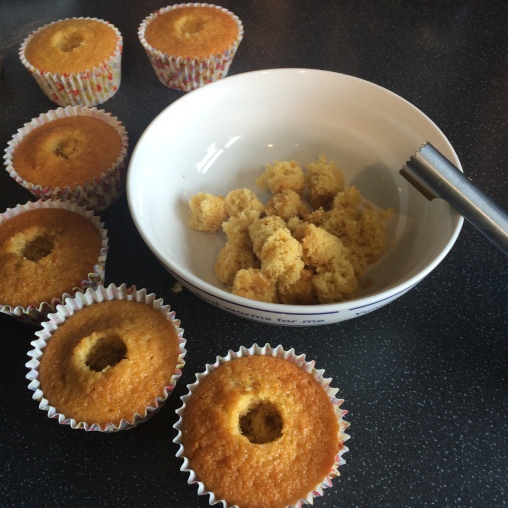 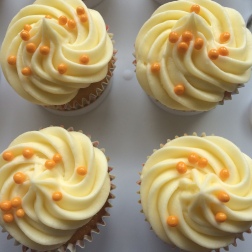 When the cupcakes were completely cold I used an apple corer to take out a little of the cake from the middle. I know there is a special gadget you can get to do this job, but the corer worked fine and I had one to hand. Happily, there is absolutely no use for these extra pieces of cake so you can scoff them under the pretext of testing. To fill the hole with lemon curd proved a touch tricky, so I used a disposable piping bag which did the trick nicely. The lemon curd I had in had a sharp edge to it which I think is very necessary, otherwise the cakes get too sweet and cloying. I then made the icing and piped it on, scattered over some little orange crispy balls that I’d found in one of the supermarkets and – done! They didn’t go quite as quickly as the prosecco cakes, fortunately, as I had promised little D the cake addict that I would try and bring one back for him. Retained crown as “Mummy, the best baker in the WHOLE WORLD”. 8-year-olds are not exactly known for their commitment to veracity, but it was a lovely little ego boost.

It had to be done, really. I had to go and see. I always enjoyed the tv series and  when they finally made an Absolutely Fabulous movie it seemed almost rude not to watch it. I think the film is proving pretty popular, although I saw it in a little screen on a Tuesday, it was packed out with only a seat available here and there. Thing is, although it was packed, it was actually quite quiet. It didn’t have the vibe that it should have of groups of friends enjoying themselves, so I don’t think I was the only one who found it rather disappointing. The best jokes by far were in the trailer and the whole thing felt like it was marking time before it got to the Kate Moss incident, but then it never really went anywhere after that – just sort of limped along, which is a shame. There were some funny set pieces, I particularly enjoyed the Inspector Clouseau-esque car chase ending in a pool, but it was really just one of these after another, and the cameos, so so many cameos! There was an occasional logic to these – the Orla Guerin one with her reporting on the death of Kate Moss from the banks of the Thames was funny and well thought out, but many seemed shoe-horned in just for the sake of it. In short, I would save your cash and watch it at home when it comes out. And do so with a glass of wine or two and some friends. I think it will be funnier that way.

I am writing this bit whilst sitting in my extremely grubby car listening to a downpour rattling on the roof. I know that shortly I will have to leave the car and go out into said downpour for my least favourite activity – the wet school pick-up. There seems to have been an unusual amount of these this term and they are another thing that I will definitely not miss during the holidays. Although sitting at home with D & O whilst the rain pelts on the windows has become much less appealing since O discovered board games. I don’t really like playing board games (exceptions can be made for drunken family games at Christmas) and they are even less appealing when you are required to play them by a 5-year-old who bawls the place down at least 3 times during them while insisting that he is really enjoying himself. I would much rather snuggle up with a nice book.

This book is a sequel, though I think it stands pretty well on it’s own. I’m partial to a 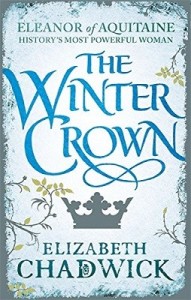 historical novel or two and The Winter Crown is actually the middle book of a trilogy about Eleanor of Aquitaine. I found the first one, The Summer Queen, pretty addictive and this second didn’t disappoint. It is an absorbing story of a woman with a strong sense of duty and of belonging to a place attempting to shape her future in a time when she had little to no power of her own. As this is a novel about noble women in the medieval age, it inevitably also contains many smaller stories of the way women of high birth were used as pawns in the power games of their husbands and fathers and the consequences for their lives and occasionally their sanity. Elizabeth Chadwick imbues the novel with a potent sense of historical time and place as well as the circumstances in which these women find themselves. It is also interesting that although we generally think of this as a time of Kings of England, those kings seemed to spend very little time anywhere near England, to the point that you have to wonder why they bothered to travel over from Normandy and conquer the place. Henry II, who is married to Eleanor in this part of her story, fought very hard for his crown for most of his early life, but then seems to spend the rest of it worrying about his sons taking it from him. The last in the trilogy is out this autumn and I’m looking forward to how we get from the squabbling teenagers of the end of this book to the legends that are Richard the Lionheart and Bad King John.

To be completely honest, I have no idea how many of these posts I’m going to manage over the summer holidays. It’s taken me 3 weeks to get around to this one! We break up a week today. Wish me luck.