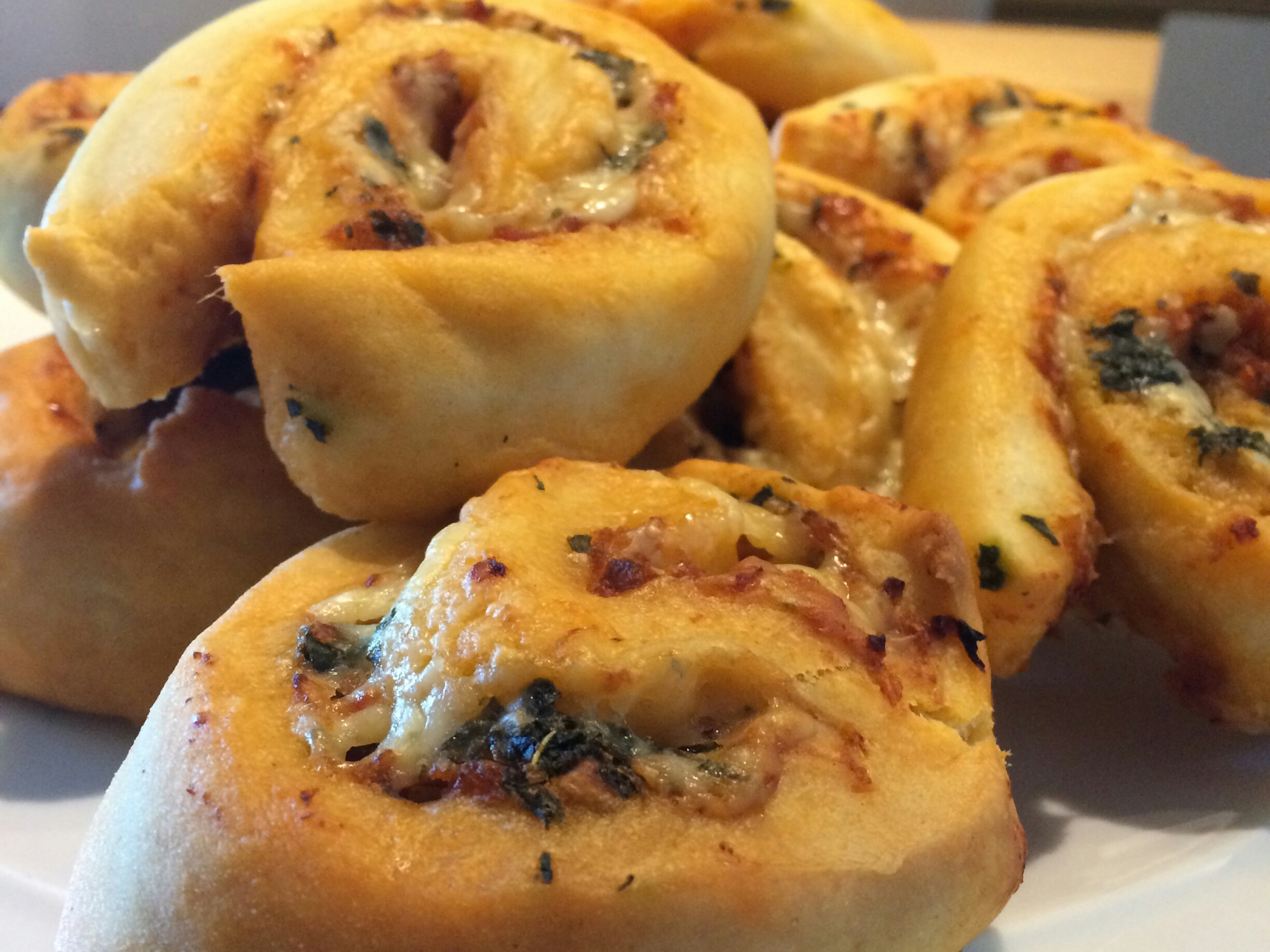 Bake of the week: Pizza rolls
Movie of the week: Bad Moms
Book of the week: Resitance is Futile by Jenny T. Colgan
I survived! And if you’re reading this and not gibbering in a corner with your hands over your head, then I guess you did too.
The holidays treated me pretty well this year. The weather has been great. This has been a massive help for my sanity, as being outside and away from the house tends to change my boys from being whiney bickering limpets into something approaching decent human beings. Many day trips were had, to the point that the sight of my rucksack is now accompanied by a feeling of exhaustion and dread. I have hung a coat over it in the cupboard. On the plus side – I love a castle and I know a lot more about volcanoes than I did six weeks ago, which according to the school meeting we had last night is going to come in very useful!
One thing the holidays actively discourages is baking. Not only am I rarely in the house, but when I am I seem to constantly have a child under my elbow or it’s just so hot that I can barely manage cooking dinner, let alone baking. However, towards the end of August I did start to get fed up with the endless run of sandwich picnics and remembered a recipe I had tried last summer holidays but that D&O had turned their little noses up at yet again. Feeling brave and acknowledging that they had become better at trying things over the last year, I decided to give it a go again and they are now a firm favourite. I give you – pizza rolls!

This is a recipe taken directly from the cook book My Daddy Cooks, which I would heartily recommend. Everything in it is simple and extremely tasty.

I’ve reproduced the basic recipe here. I’m personally rather scared of yeast (bread week on Bake Off is the stuff of my nightmares) so thankfully

these rolls are more of a scone dough and only require very light kneading. Kneading is also a bit of an issue for me due to my excessively short stature. There is no way I could do it at a counter without using a set of steps. The kitchen table comes into its own here, as does the handy pastry cutting mat that I found in Ikea. You can fill these rolls with anything you have lying around really, but in order to entice my pizza-loving crew (and use up some of the overgrown basil plant on my windowsill) I chose tomato & cheddar with chopped basil. The dough is pretty basic – just rub the butter into the flour and add the milk to make the dough.

Empty it out and pummel it lightly for a bit – not too hard, think more “bugger, I need to buy more coffee” than “my kids have been utter shits all morning and I’ve given up drinking for the month”. Now it needs rolling out into a rectangle so it can be rolled up like a Swiss roll once the fillings are in. This can be a bit tricky to get anywhere near even, just splodge it about a bit and roll it until it looks about A4 size and shape.

Now for the filling. When I do these I like to use sun-dried tomato paste instead of tomato puree as it’s wetter and makes for a slightly more interesting taste. So, sun-dried tomato paste in a thin layer, followed by a sprinkling of freshly chopped basil (I whizzed mine in the herb chopper) then a generous spread of grated cheddar. Once that’s done, you need to roll it up like a Swiss roll. This can be hard to get right if you are naturally uncoordinated – it helps if you do it on a mat and gently pull the mat up with one hand while tucking it all up together with the other – start on the longest edge. Then use the sharpest big knife you have to slice it into about 10 pieces, arrange on baking paper on trays, brush with a little milk and baaaaaaaaaake!
When they’re done leave them to cool on the trays or you will get melted cheese everywhere. They are scrummy warm, or cold on a picnic.
*
What seems like many moons ago at the beginning of the holidays, I managed to pop to the cinema with HO and saw Suicide Squad. It was a bit boring and didn’t quite work. I can manage most Marvel films, but DC have always left me a bit cold. Also, I found the relationship between the Joker and Harley Quinn quite disturbing, so despite some redeeming features (Viola Davis as Amanda Waller is awesome) it pretty much bombed for me. Anyway, I digress. Before the film there was a trailer for Bad Moms. I sat up tall in my seat. I laughed. This looked promising. This I needed to see! I was a little concerned about the “brought to you by the guys who brought you The Hangover” but the first Hangover film was actually quite funny, so I decided to reserve judgement and went to see it.
Firstly, let’s get this out of the way – go see it. Just find a mum friend, pick an evening and go. Brook no arguments, you won’t regret it.
Since I saw it a few weeks ago, I’ve chatted about this movie to a lot of mums and I’ve yet to find someone who didn’t find it funny. I haven’t read any reviews of it, but I imagine that it’s unapologetically female centred narrative and criticism of the contemporary cult of perfect motherhood has got it into trouble in a few quarters. The basic plot of the movie runs as follows. Mila Kunis plays Amy, a woman who had her kids quite young and is juggling the demands of her husband and kids, her home and her career whilst constantly firefighting on all fronts. After a particularly appalling day she snaps and decides that she is fed up of attempting to be perfect and would like to have some fun. She is joined in her campaign by single mum Carla, played by Kathryn Hahn, and stay-at-home mum-to-many Kiki, Kristen Bell. Their new attitude pits them against the ruling PTA queen Gwendolyn, Christine Applegate, and her acolytes and leads to Amy putting herself up for election as PTA president.
The humour in the movie is pretty broad – don’t go expecting clever pithy one-liners. This is loud and proud with a lot to recognise in the everyday lives of mums – hiding from the PTA, getting walloped with a bat by your toddler, dragging yourself on the school run and plastering a smile on your face while you feel like crap, judgy-pants other mums, ridiculous school projects that can’t possibly be done by your child and generally trying far too hard to make your children’s lives happy and carefree at your own expense. When the mums cut loose and start to enjoy themselves this becomes pure wish fulfillment fantasy with hilarious raucous party scenes and some wonderful little chats between just the 3 of them, both with and without the kids.
Kathryn Hahn on particular is extravagantly entertaining. Her character, Carla, is brash and OTT and Hahn embraces every pratfall, lewd joke and drunken rant with enthusiasm. I’ve not seen her play a role like this before and I would love to see more. There are some real issues that linger quietly under the surface here too. Amy smartly tells her boss when she is expected to be present for a meeting, that she is not paid to be in that day – mums still end up coming back from maternity leave to do reduced hours only to find that their responsibilities remain the same, they are simply expected to do the same amount of work in less time. One of Kiki’s first lines is her saying that she has been up all night with her daughter “barfing into her hair” but “she’s happy! really happy!”- this constant striving for perfection and pressure to ‘enjoy every minute because they grow up so fast’ is what drives these women to the brink. Them, and so may like them. With its plot pitting different mum stereotypes against each other, much was hanging on the way the film ended. I was pleased that it managed an ending that didn’t buy into an annoying mummy wars narrative and although I’m still not completely sure about the pre-credit mum/daughter chats, the very noisy cinema I was in became completely still and almost silent, so they were certainly effective.
*
I think I have mentioned Jenny Colgan’s thoroughly enjoyable romances on this blog before. I’ve been working my way through them for a while now and become fond of her rather dreamy heroines. What I did not know, was that she has another identity as a writer of Dr Who tie-in books and has always been a science fiction reader. This made the book I

came across in the library by Jenny T. Colgan a little less surprising. Resistance is Futile is one of those books that is actually science fiction, but, presumably in order not to frighten off potential lady readers, carefully doesn’t mention that fact anywhere on the book cover. As a former avid reader of science fiction, this is the sort of book I would like to see more often. A science fiction novel with characters that are fully fleshed out and that I can care about without running to doorstop sized tomes. Something I haven’t found a lot of since I ran out of 70s feminist sci-fi back in around 2003. I enjoyed the variety of the mathematician characters too – although some STEM geeks to tend towards the Sheldon Cooper end of the spectrum of nerdiness and social awkwardness, I have met many many over the years that do not and it was cheering to see that reflected here. When the aliens do turn up, they have an interesting and well thought out culture and all the main character Connie is as sparky as you would expect from a Colgan heroine. Oh, and it’s also pretty funny as well as warm and romantic. Also as hoped. If you’re new to sci-fi and are a bit trepidatious, then don’t worry, there aren’t any flying saucers or laser guns (that I can remember) and I don’t think anyone gets beamed anywhere. I could go into a massive rant about how true science fiction is about what it means to be human and that the rest of it is just space opera, but I will spare you all on this occasion. All in all, highly recommended and if anyone knows of anything similar that I may have missed out on in the last 10 years or so, please let me know!
Advertisement