The Easter holidays dragged by at a snail’s pace. If said snail happened to be a post viral child with an intense reluctance to walk anywhere whilst perversely constantly asking where we were going “for a nice walk” today. At some point while I was inside looking longingly out of a window, spring arrived. So now I am typing this in my garden while trying not to look at all the things that need doing. HO has decreed that he is taking a week off in May do “deal with the deck” which looks like it’s falling to bits and get rid of the last vetiges of the previous owner’s misguided attempts at some sort of tranquility garden at the end. I don’t much care for gardening. Gardens are lovely, but gardening itself is a bit too much like housework for my liking.

The fact that I’m managing to sit in my garden at all is testament to one thing – the kids are back at school. O came out of the classroom (minus his jumper! how? it’s the first day back?!) with a happy shiny grin on his face and remained bright-eyed for the rest of the day. I guess he’s finally got over his 2 weeks of illness.

I have been easing myself back in gently. I have made a banana loaf which is lovely for breakfast slathered in butter or chopped into wedges for lunchboxes. If you have a few bananas that look like the pic on the left, then give it go, it’s super easy. You’ll need a large loaf tin, the ones labelled 2lbs or 1kg depending on the shop you’re in, the bananas and the usual eggs, sugar, milk and flour. I find banana bread a little dry, so I make this loaf with mashed banana in the mix and chunks of banana folded in afterwards. 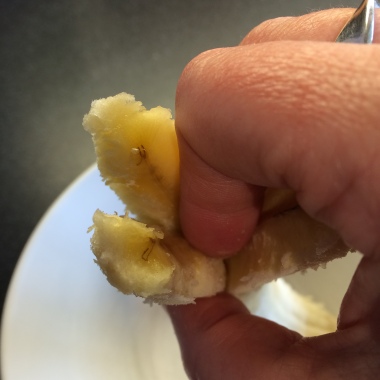 A while ago, I read that bananas do this amazing thing where they split into 3 parts if you just peel them and press gently on each end at the same time. Now this doesn’t work terribly well on really ripe ones, but if you peel it and push your finger into the end gently then you can get to the centre and split it nicely into the perfect size to do a bit of slicing and hey presto! Perfectly sized banana chunks. But set those aside as you don’t need them until later. The full recipe for the banana loaf is here. I’ve tweaked it quite a bit over the years and often make it with wholemeal flour, although it’s best to add a little more milk then as it does make it a little drier. 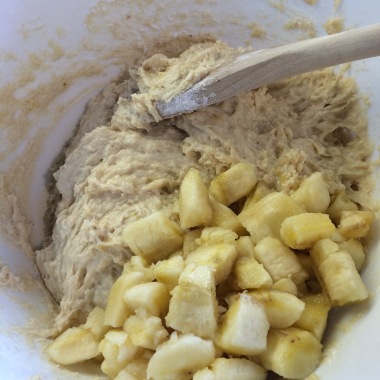 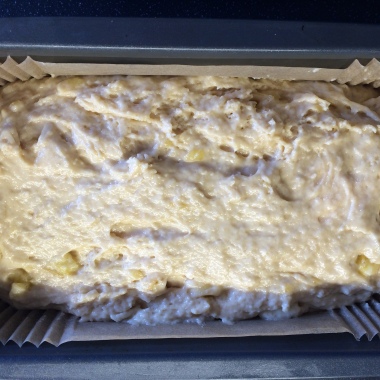 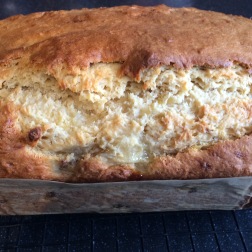 I haven’t tried for a while, but if you wanted to make it a bit fancier I expect it would be really yummy with some chocolate chips thrown in the mix.

We haven’t historically had a lot of help with childcare. Mostly we haven’t needed any, which is convenient as my parents live an hour’s drive round the M25 and HO is a Yorkshire boy with the rest of his family stubbornly persisting with living in that Northern wilderness. However, around once every half term my parents take the boys for the weekend and HO and I get to try and remember what we used to do before we had kids. Happily for me and this blog, one of those things was to go see movies. We do have slightly different tastes in movies (I have never understood the appeal of Lord of the Rings; he would have dropped off during Carol) but our little Venn diagram of interests overlapped this weekend with Hail, Caesar! the latest Coen brothers movie. This movie was the Coens at their silliest and was thoroughly enjoyable. Clooney was doing his bewildered idiot familiar from O Brother, Where Art Thou? whilst strutting about in a Roman soldiers outfit; Josh Brolin did menacing and troubled; Scarlett Johansson got to look amazing and sported a fantastic accent as a troublesome swimming star; Ralph Fiennes as a fey director – I could go on and on, the performances were all incredible and all the actors looked like they were having a fantastic time. The scenes from the films that were being made lovingly reproduced the atmosphere of movies of the early 50s with hyper real colours, awkward dialogue, song and dance performances and synchronised swimming numbers, they almost made me wish they went on longer. It was a fairly forgettable movie I suppose, I can’t see it having a fantastic shelf life, nor am I likely to see it again, but it was a lot of fun, and after 2 weeks steeped in snot and vomit, you can’t say better than that!

A God In Ruins, on the other hand, is not lighthearted. I have been a fan of Kate Atkinson since her very first novel and have enjoyed each and every one. I have been known to look at my phone pictures and think that I don’t have a clear recent picture of my boys and snap a good head and shoulders photo in case they go missing, just like Jackson Brodie. Though in my case this is much more likely to be used if the little buggers simply run off in whichever wood I happen to have taken them out to so they can poke things with sticks. A God In Ruins follows Teddy Todd, brother of Ursula, the heroine of Atkinson’s previous novel Life After Life. Teddy is by turns a happy and much-loved boy, a bored young man who’s life is interrupted by WWII and becomes a bomber pilot, a stagnating husband and father and an adoring grandfather and bewildered father. The narrative skips around between past and pressent, and it changes which (and whose) present we are reading. Mostly Teddy’s, but also that of his wife Nancy, his daughter Viola and his grandchildren Bertie and Sunny. The story is fascinating and incredibly engaging, I found it very hard to put down and even in the holidays managed its over 500 pages easily in 10 days. It is not an easy going read, by no means the book-hug I was looking for the previous week, but it was warm and heartfelt, with Atkinson’s keen humanity shining through it. A book very much, I felt, about the importance of care. the symbol of the love that Teddy had throughout his childhood – the little silver hare – accompanies him on his bombing raids and it is this love and care that help sustain him throughout his life; then the absence of care and the effect of the lack of it on his grandchildren. It is also a poignant reminder of all the lives that could have been, not just those who died, but all those who could have been born and the lives they  could have lived.